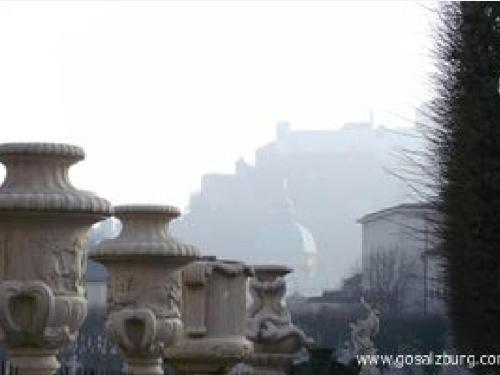 It was in the 18th century, when architect Lukas von Hildebrandt created, under the rule of archbishop Franz Anton von Harrach, the chateau Mirabell and its gardens. Since then, they have been considered as an outstanding example of baroque architectural style.

Today, classical concerts are performed in the chateau, its other rooms are used by Salzburgs adminstrative department and are not open to the public (instead of an archbishop, the mayor of Salzburg resides in Mirabell today - that's how the times have changed, or have not:).

Although, the gardens around the chateau are open to the public and you can see a rather quaint collection of baroque dwarf statues! , a museum of baroque art, a childrens playground, some fountains and many park benches to sit and bath in the sun (if you are lucky and it shines). 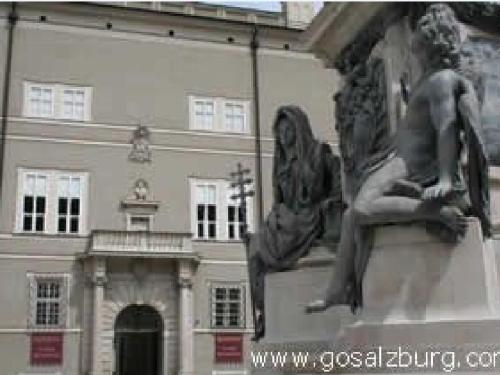 Since the arrival of Holy Hrodbertus (Hl. Rupert) in the year 696 a. D. Salzburg has been a city with an archbishops residence.The rule of the archbishops lasted over 1.100 years, until the year 1803 when the last of the spiritual rulers, Hieronymus Count Colloredo, was forced to resign.

Today, the former residenc of the archbishops can be visited. You can stroll through the Representational Appartments and have a look at the masterpieces of craftmanship and masonry that are shown there. 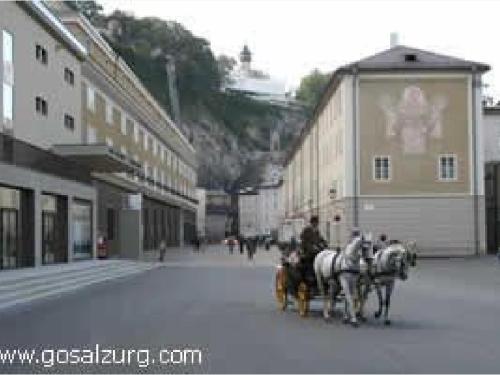 The Salzburg Festival is a classical music festival, featuring opera performances as well as classical concerts with world famous conductors or the world premiers of plays.

Its roots go back to the 1920's when the music festival was founded as "a symbol of reconciliation of a generation torn by wars," by Hugo von Hofmannsthal, Max Reinhardt and others.

Today people from all over the world (mostly rich people, because the ticket prices are generally very high) come to Salzburg during the Festival season (from end of July to the end of August) to enjoy some culture.

Off the Festival season you can look behind the scenes of the Salzburg Festival while joining a guided tour through the Festival Halls. 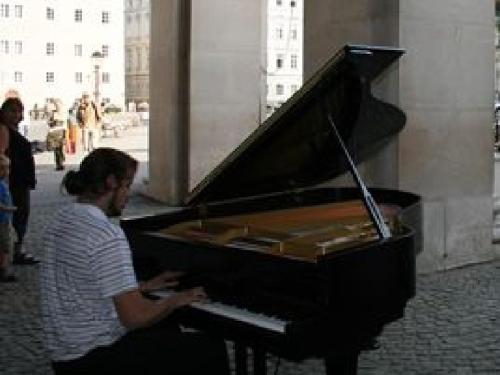 Mozart is dead! (since 1791), but he lives on in Salzburg: as -balls, Sausages, umbrellas, baseball caps, beer glasses, and whatever you can print a Mozart picture on.

But of course, he lives on in his music too, which can be enjoyed in many concerts throughout the year (especially in the Salzburger Schloss- and Festungsconcerts - we can help you with ticket requests) or in the concerts and operas during the Festival season. Today, the city of Salzburg profits a lot from its most famous son. So it is easily forgotten, that Mozart was literally kicked! out of Salzburg in 1781 and that he lived in Vienna from this point on until his death.

On the traces of Mozart, you can visit his birth place (still original) as well as his livingg house (a reconstruction, as it was destroyed in the 2nd World War). But there are also some other places, as the archbishops residence, where the young Mozart gave his first concerts, or the cathedral , where Mozart used to play the organ, which are of interest 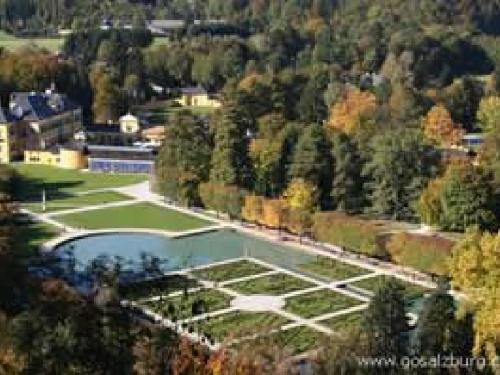 "Oh, what a lovely place for retreat, what grace, what delight, what litle earthly paradise I have had the luck to see today. That's Hellbrunn!" - Domenico Gisberti, 1671

Hellbrunn, with its ample park and the unique "Trick fountains" is the creation of the italian architect Antino Solaris. He built it as a summer palace for archbishop Markus Sittikus.

The main attraction of Hellbrunn are the "Trick Fountains", a piece of 17th century High-Tech. Driven only by hydro-pressure, you can still walk through a park of water spitting statues, chairs, grottos, etc… Try (not) to get wet!

The palaces park is a popular spot for locals to have a picnic, go for a walk or visit the zoo of Salzburg, which is located there. Altogether it is a good place to relax from exhausting sightseeing. 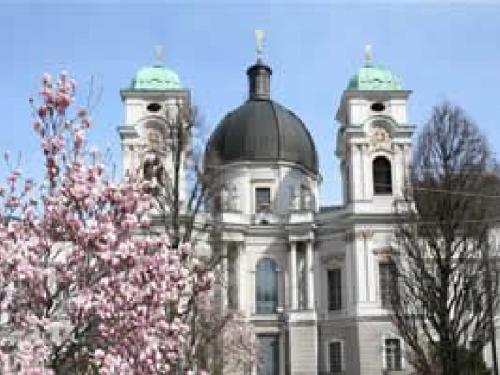 More than 1.000 years of catholic leadership in Salzburg led to the construction of many churches and monasteries in Salzburg

From Gothic, Romanic to Baroque style, all kinds of church lovers will find a church to fit their taste in Salzburg :)

From the gold, out of Salzburgs gold mines, first-class goldsmiths, as Paulus von Vianen, created great pieces of precious art. Unfortunately many of them got "lost" over the years, but there is still a lot built-in art left in the churches to be amazed. 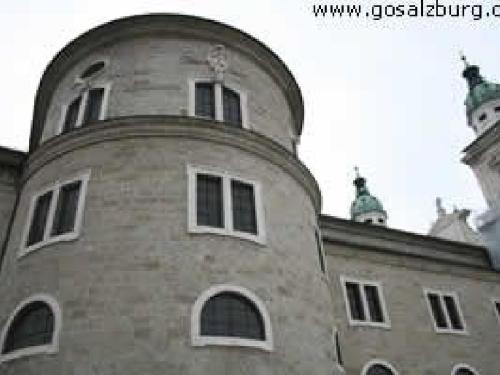 Since its consecration in 774 A.D. the cathedral of Salzburg has been on the same grounds.
Although, the cathedral had to be rebuilt persistently in the past 1.300 years, as in the year 1181, and after a great fire in 1598 and after the cathedral was partly destroyed by bombs in 1944.

Still, the cathedral is a good example of the wealth, power and sense for arts of the 17. centurys archbishops. They hired famous Italian architects in order to plan the cathedral (after the great fire) and its surrounding squares. 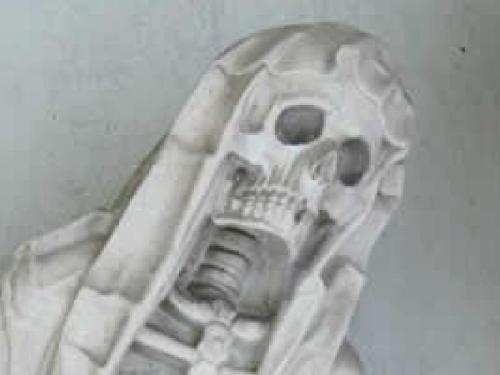 Skulls of stone stare into space with their empty eyeholes, the last grains of sand of hourglasses seem to trickle to the ground. It is a queasy feeling, going for a walk through the cemeteries of St. Sebastian and St. Peter.

Besides several dead people of Salzburgs history (some Mozarts (but not himself), archbishops, medical revolutionizer Paracelsus, or the "English Patient" (not the actor, but the original guy the Hollywood movie is based on), the statues in the cemeteries give a good picture of the baroque ambivalence between death and the love for life. 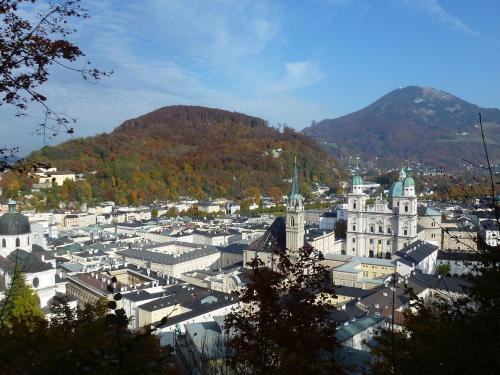 Several paths, leading up and through the mountains woods invite you for a walk with breathtaking views over the Old and New Town of Salzburg. esides a lot of nature, the old fortification walls and structures are of interest for hikers.

Besides modern history, the first remains of settlements of Salzburg can be found on the Mönchsberg. These trace back to the Neolithic (4.500 - 2.000 b.C.)! Also the Romans settled on the Mönchsberg and grew wine up there. This tradition has been readopted lately! 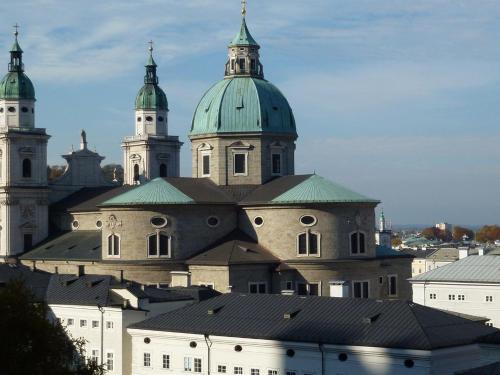 The first remains of the majestic Fortress Hohensalzburg date back as as early as to the 11.Century A.D.

Over the centuries, the archbishops continued in enlarging the fortress and today it is the largest Fortress in whole Europe! Besides a museum and a great view, you can feel how time turns back while strolling through the castle.

To get to the castle, you can either take a train or you walk a, rater steep, path. Besides the way up to the Fortress, several pathways invite you for promenades through the woods of the Fortress Mountain, the "Monchsberg". 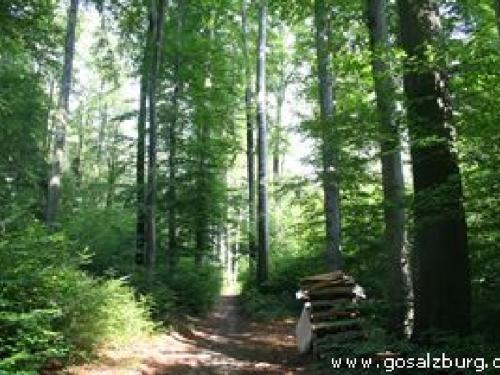 It was the plan of archbishop Wolf Dietrich (bishop from 1587 - 1612), to make Salzburg an "ideal city".For this purpose, he tore down great parts of the old medieval city core and placed the huge reconstruction of the cathedral there, flanked by spacious squares with fountains.According to Wolf Dietrich, Salzburg should become the "German Rome", and it is still a great feeling to cross the large squares and look at the elaborate sculptures of the several fountains.
Previous
Next